To address the challenges in the tourism and hospitality sector, the Department of Tourism (DOT) presented its 7-Point Agenda:

END_OF_DOCUMENT_TOKEN_TO_BE_REPLACED

The report provides a holistic approach to the post-COVID-19 recovery that brings out opportunities for the Philippines. In recent decades, the World Bank (WB) identified the Philippines as one of the many countries that have climbed the Global Value Chain (GVC) ladder.

END_OF_DOCUMENT_TOKEN_TO_BE_REPLACED

The 21st World Travel & Tourism Council (WTTC) Global Summit on 20-22 April 2022, held in Manila, Philippines, is seen as an opportunity to reopen the country to international visitors and to sustain the Travel and Tourism competitiveness and resiliency.

WTTC’s annual Global Summit is the most influential Travel & Tourism event on the calendar. This year, industry leaders gathered with key government representatives to continue aligning efforts to support the sector’s recovery and move toward a safer, more resilient, inclusive, and sustainable future. Discussed in the Summit are the latest travel trends, sustainable investment prospects, regenerative tourism, and seamless travel in a pandemic era, among others.

END_OF_DOCUMENT_TOKEN_TO_BE_REPLACED

DOF Secretary Dominguez assures that the Duterte Administration is closely monitoring developments and is doing its utmost to mitigate the impact of oil and food price increases amidst the ongoing Ukraine-Russia conflict.

During the 2022 Philippine Economic Briefing (PEB), Sec. Dominguez reported the Duterte Administration’s socio-economic reforms over the past six years, including the government’s effort to accelerate economic recovery amid the COVID-19 pandemic.

END_OF_DOCUMENT_TOKEN_TO_BE_REPLACED

Given the pandemic that affected the whole world with the overwhelming health crisis that brought risk to people’s lives and businesses, the government and the private sector was pushed to pursue innovation and digitalization programs.

We innovate to transform and shift to digital. Join us as we celebrate the 25th week-long celebration of the National Exporters Week highlighted by the National Export Congress 2020 via zoom platform with the theme “Digitalization Boost: Invigorating Exports in the “New Normal”.

Exporters and other stakeholders are enjoined to register for the National Export Congress 2020 at bit.ly/attendNEC2020. The Congress will feature new business models and strategies to help exporters cope and grow through technology and innovation to invigorate exports in the New Normal. See you virtually!

The Department of Trade and Industry-Export Marketing Bureau (DTI-EMB), Export Development Council (EDC) and the Philippine Exporters Confederation, Inc. (PHILEXPORT) cordially invites all exporters, small and medium enterprises (SMEs), government policy makers, trade support institutions, the academe, and international organizations and other relevant stakeholders  to save the date and participate in this year’s first virtual National Export Congress (NEC) 2020 on 03 December 2020, 8:00AM to 4:30 PM via Zoom with the theme “Digitalization Boost: Invigorating Exports in the New Normal”.

END_OF_DOCUMENT_TOKEN_TO_BE_REPLACED

“Driving Exports Through Digital Transformation” was this years’ theme for the annual National Export Congress which was successfully conducted last 06 December 2019 at the Philippine International Convention Center. The theme focused on technology and innovation initiatives to grow exports and promote collaboration between and among the government, industry and academe as a critical element in improving the country’s economy.

The Congress tackled timely and relevant issues on what policies can the government develop to cope up with the demand and rigors of converting the country’s international trade agenda into the digital era.  It also tackled how businesses, especially the export sector, could equip themselves and properly respond to the fast-changing technological revolution that is dominating and shaping today’s global trade.

DTI Secretary Ramon M. Lopez, in his keynote speech, revealed that the department has called for a P25 billion to P30 billion budget for the export sector over a three-year period as government moves to provide all-out support for the export sector through incentives under the Strategic Investment Priorities Plan (SIPP), implementation of standards and safeguard measures to strengthen domestic manufacturing, reduced trade barriers, and fund mobilization, including soft loans. The Trade Chief added that such a move will not only bolster the country’s economic growth but will address our trade deficit, generate more jobs and employment and income opportunities for Filipinos.

On the other hand, PHILEXPORT President, Mr. Sergio R. Ortiz-Luis, Jr, emphasized the need for the country’s MSMEs to level up their operations and improve their business processes and efficiencies as the economy moves towards emerging opportunities in the age of digitalization.

Moreover, the NEC also gave due recognition and acknowledgment to twenty-one (21) Top Filipino exporters of 2018. They were given recognition based on their track record, excellence and innovation in the delivery of goods and services. Their fortitude and determination to achieve success in producing globally competitive products has greatly contributed to the country’s export revenue.

The NEC is the culminating event of the National Exporters Week (NEW). Every first week of December is the annual celebration of the NEW per Presidential Proclamation No. 9931, s. 1996 and House Resolution No. 33. It highlights the government and private sectors’ commitment to continuously work together to sustain export promotion and development.-GTM 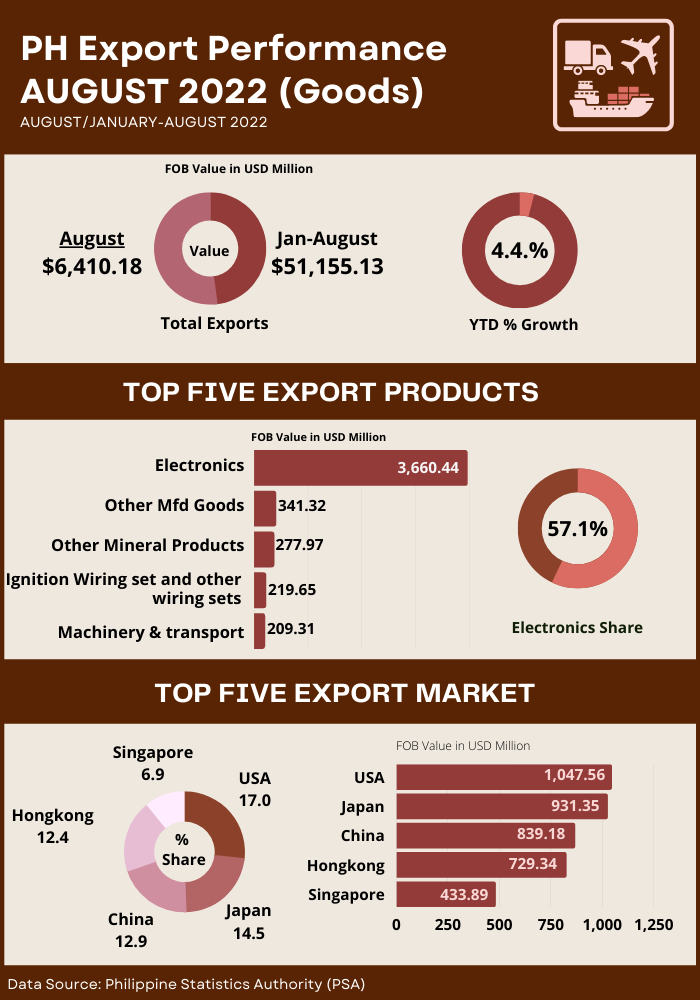